Added To Our Free Archives: 12-Year Old Quinn Ripke Of Pettisville Is Taking The Fight To Juvenile Diabetes 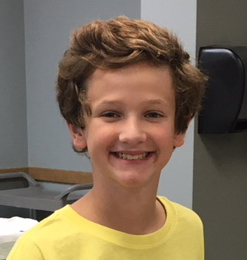 You’re not even in high school yet, and you’ve been diagnosed with a significant and incurable disease. Your world is rocked. You’ve been knocked down. What do you do? Ask, ‘why me?’ Proclaim that it’s not fair? If you think like Quinn Ripke of Pettisville, you take a different tack…you go on the offensive against that which knocked you down.

“My son Quinn was diagnosed with type one diabetes in May of 2017, when he was nine,” said his mother, Sarah Ripke. “In January, his teacher gave the kids an idea to think of a way to make 2020 better. What could you do? And he came up with the idea of raising money to give to JDRF, which is the Juvenile Diabetes Research Foundation.

They are in charge of researching ways to make life better for type ones, or funding research to find a cure, which we’re hopeful that in his lifetime there will be a cure. And so we’re going to be making enchiladas. I posted something on Facebook for him, and so the friends that are in my list on Facebook said, ‘Yeah, we’ll take a pan,’ and now we have to make 80 pans of enchiladas. I’m taking a donation for them, So there’s not like a certain amount of money that I know will be coming in, but whatever we get them will be given to JDRF.”

The road for this enterprising young man has been fraught with everything from socially difficult issues to astronomically high blood glucose levels, the two sides of a classic cause and effect scenario. “Quinn had shown some signs early on that we probably didn’t necessarily pinpoint to type one diabetes that ran through my mind,” Sarah said, “…but I thought we don’t have any in our family. I just thought he had a small bladder, and he had some bed wedding.”

“It was Memorial Day; we had been decorating graves with my parents,” Sarah continued. “There were many grandparents and other relatives that I hadn’t been to their graves in years. I didn’t even know if I could find them in lower Michigan, and wanted to do that with my parents because they’ve always done that. And so we went as a family, and I think every graveyard that we stopped at Quinn had to go to the bathroom.”

“We had had McDonald’s for lunch, so he had had a coke to drink, and that sugar was just going through him. We got home that night; we had a campfire, and he had three s’mores, He peed six times within 45 minutes before going to bed that night. He was worried and I was worried. He had an upcoming field trip the next day. It was a walking field trip, and he was afraid that because his teacher had said there’s not going to be restrooms. I said, ‘Don’t worry, I will contact your teacher through email tomorrow, let her know what’s going on, and tell her that I’m in the process of getting you an appointment.’

“So that Tuesday, then he went to school and it was my first day of summer break. I’m a teacher. So I was kind of excited that I had a day off to myself and my kids are at school. But I had to pick them up about 1230 for that appointment, and we went into Archbold for that. They took a sugar there, which would have been right after lunch so we knew that sugars would be high without any insulin. His sugars were for too high for the meter to read. Anything over 400 does not pick up on a finger meter reader. Yeah. So how old is he again? He was nine when this happened. Our doctor who delivered Quinn said we’re going to go from here to the emergency room at Fulton County.

The recollection of events understandably brought Sarah to tears as she tried to gather her composure and continue. “She said they’re going to get him started on an IV, and they’re going to transport him to Children’s Hospital in Toledo. I was just totally blown away.”

“They didn’t even have him get his book bag from school because he was going to go back, I was going to take him to this appointment, and it wasn’t going to be a big deal. He was going to go back to school, and, like life completely flipped upside down at that moment. And so we went over to Fulton County, and they were able to determine his sugars exactly…and his sugars were 439.
They contacted the doctor at the Children’s Hospital in Toledo. He said that everything else in Quinn was stable. They were asking me questions like, ‘Did he walk in here on his own? Is he conscious? Can he answer questions? I’m like, ‘I just picked him up from school. We got a baseball game tonight that we’re going to go to,’ just not grasping the severity of all of it.

“He was stable enough that we were able to transport him to the Children’s Hospital in Toledo ourselves,” Sarah continued. “So we were able to come home and unpack, and I think I packed for one night because I’m still not grasping everything. We ended up being there for three days. In just a second life was turned upside down.”

It took some time, some education and some counseling, but Quinn learned to take control of his own life. “He’s doing really well for being 12,” Sarah said. “I feel like he manages his diabetes really well. It’s not perfect, and there are moments where I’m frustrated with him. But I think he handles it pretty well for the age that he is. It made him grow up a lot; it’s made him have to be responsible. He’s lost some of that carefree aspect.”

Armed with donations from Pettisville Meats, Chief and Brookview Farms, the enchilada assembly got underway on July 7. This 12-year old kid, still years away from moving up to Pettisville High School, is taking on the disease that turned his life upside down, and he’s doing it in a manner in which many adults three and four times his age would struggle…one enchilada at a time. Those enchiladas added up though. At last count, Quinn had a tidy sum of over $1,000 for the JDRF, and the number was still growing.

The post Added To Our Free Archives: 12-Year Old Quinn Ripke Of Pettisville Is Taking The Fight To Juvenile Diabetes appeared first on The Village Reporter.