AP Exclusive: Inside NCAA’s Attempt To Save March Madness 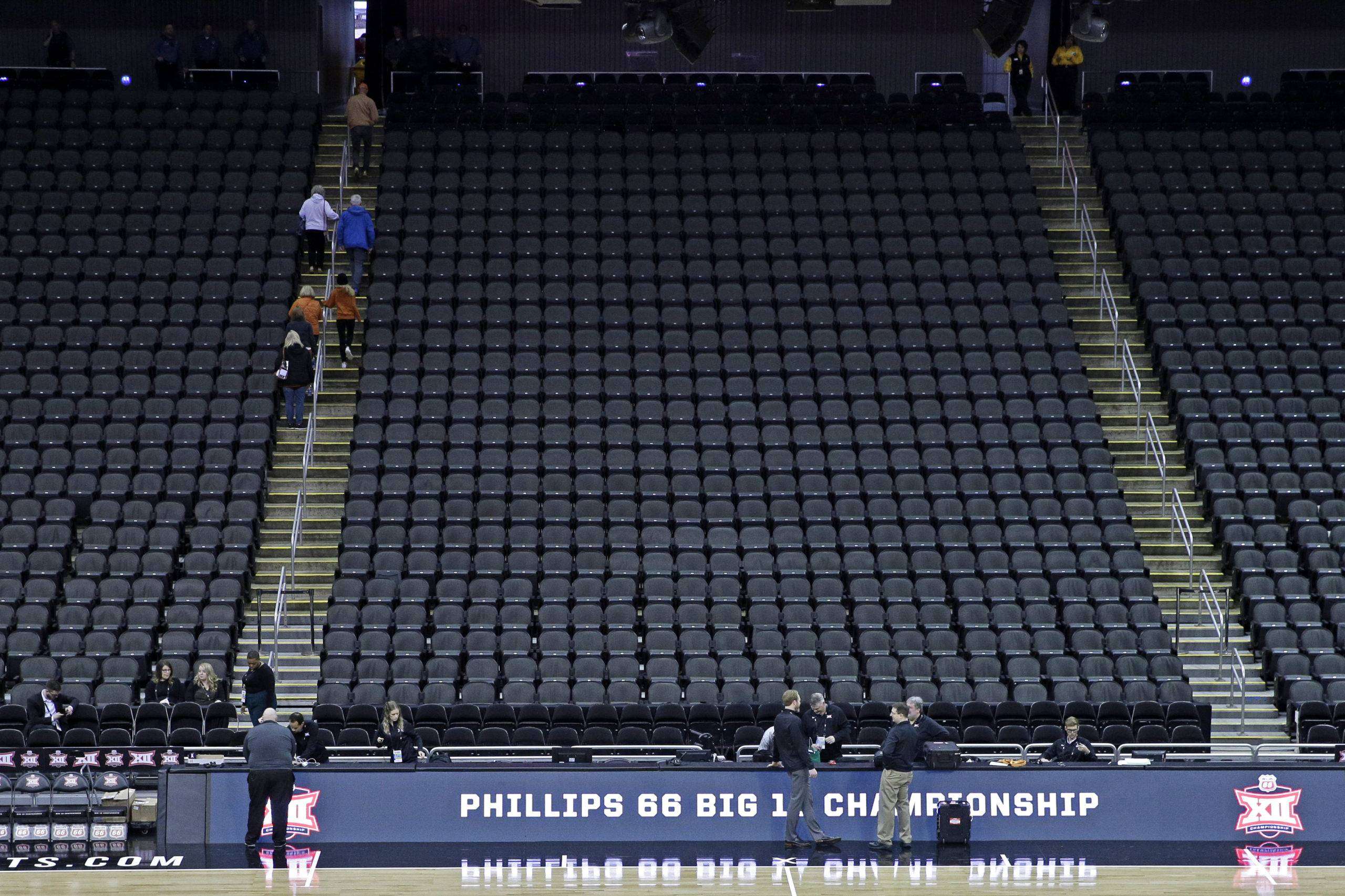 Fans leave the Sprint Center after the remaining NCAA college basketball games after in the Big 12 Conference tournament were canceled due to concerns about the coronavirus Thursday, March 12, 2020, in Kansas City, Mo. (AP Photo/Charlie Riedel)

As it became apparent the NCAA basketball tournaments could not be held during their usual three-week window because of concerns about the coronavirus, organizers scrambled to devise a plan for a 16-team event to salvage the postseason in one long weekend.

NCAA vice president of men’s basketball Dan Gavitt told AP on Friday that he started to consider ways of condensing the tournament Wednesday night after the NBA announced one of its players tested positive for the virus and the league suspended its season.

But the reality set in that even a shortened tournament could not be pulled off without putting people at risk, and the NCAA’s biggest event of the year was canceled Thursday afternoon.

The cancellation of the men’s and women’s basketball tournaments came a day after the NCAA had announced it planned to play the games while restricting fan access.

“We did spend a significant amount of time very late Wednesday night trying to figure out alternative models,” Gavitt said.

Gavitt said the hope was to play games starting March 26 at State Farm Arena in Atlanta. The city had been scheduled to host the Final Four at Mercedes-Benz Stadium on April 4 and 6.

The idea was to have the selection committee choose the top 16 teams in the country, regardless of conference, to participate. The first three rounds would have been played from March 26-28, with a championship game on March 30. Gavitt said he believes eight or nine of the 32 Division I conferences could have been represented.

“Far from ideal. Far from perfect,” Gavitt said. “Imperfect as it may be, that was one of the only reasonable options we thought we could at least maintain some level of our tournaments.”

Gavitt said there was some hope early Thursday a full tournament could still be played. As that faded, the idea of holding a smaller event got “mixed interest” from committee.

“There was a real concern about not being inclusive enough, with only 16 teams,” Gavitt said. “But the other thing that was in play at that point in committee members’ minds, and we saw this play out at conference tournaments, once an NBA player was infected, I think it started to really hit home for the players, from what I’ve heard from coaches by text message and anecdotally.”

“The immediate logistical problems were that we had this rapidly, continuing right now, number of schools that were shutting down,” Emmert said. “We had the reality that if you start a tournament six weeks from now a bunch of our students our seniors and will have moved on. And when you looked at the projections of where the virus was going to be in six weeks it looks worse, not better.”

Similar reasoning went into the cancellation of all spring championships, including sports such as baseball and softball with national tournaments that don’t start for another two months. It was a move that surprised some athletic administrators.

But with hundreds of schools closing campuses, some through the semester, and conferences suspending athletic activities, the NCAA could have faced the possibility of holding national championships in sports where many of the usually participants were not fielding teams.

Emmert said he was open to reconsidering spring championships.

“If I have learned anything from this it’s to be reminded to never say never,” Emmert told AP. “And so the answer to that is of course the board and everyone else will consider anything that makes good public policy sense. Those decisions are going to be driven by medical science and there would have to be a very clear, unequivocal, all-clear determination by public health officials and our advisory panel. Sitting here today that’s very hard to imagine.”

Even Wednesday, when the NCAA seemed to have saved the tournaments by agreeing to play in mostly empty arenas, allowing only essential staff, limited family members of players and coaches, and some media, Emmert cautioned the public health crisis could force changes.

Things were looking up after that announcement, but nobody involved was able to even go to bed feeling good Wednesday night. It was revealed Utah Jazz center Rudy Gobert had tested positive for the coronavirus, and the NBA quickly shut down.

“It was certainly a very important data point that triggered a lot more conversations and phone calls among my leadership team,” Emmert said.

The question became: Was it realistic to expect that over 3 1/2 weeks, no one involved with the games — players, coaches, officials, etc. — would contract the virus?

“It was becoming more and more difficult to see our way through to that,” Emmert said.

He added: “I want to be clear, I wouldn’t describe the NBA’s decision as a pivot point. It was one piece of the puzzle.”

NCAA chief medical officer Dr. Brian Hainline said the association’s COVID-19 advisory panel, comprised of some of the country’s leading infectious disease and public health experts, was gathering information about the spread of the virus and seeing conditions rapidly changing — and not for the better.

NCAA officials reconvened on Thursday morning, worry on the rise. Other professional sports leagues, such as the NHL and MLS, were moving to suspend play. Dr. Anthony Fauci, director of the National Institute of Allergy and Infectious Diseases, told Congress the United States was failing on coronavirus testing.

“So we spent the morning then exploring a variety of options,” Emmert said. “Would it make any sense to do an abbreviated model to accelerate the calendar?”

Thursday was supposed to be one the the busiest — and best — days of the college basketball season. There were 58 Division I men’s games scheduled, with tournaments for most of the strongest conferences in full swing.

All of those games were canceled, some moments before tip-off around noon EDT. Emmert said there was a flurry of communication between conferences and NCAA officials in Indianapolis.

Emmert said the NCAA did not advise any conference to cancel its games, but it was not long after that when the prospects of saving March Madness became bleak.

“We got to noon (CDT) and it was becoming pretty clear that between the information we received from Brian (Hainline) and his team, the challenges of trying to do testing around the Sweet 16 model … all of those issues coming together. The changes in the public policy environment among a lot of the states, that this just wasn’t going to work,” Emmert said.

A call was arranged with the 20-member Board of Governors at 3 p.m. EDT. They heard from Emmert, Hainline and Gavitt, all explaining why options like a mini-tournament or postponing wouldn’t work.

Ohio State University President Michael Drake, the chairman of the board, polled board members and gave them all an opportunity to speak.

“It was unanimous that making the decision to cancel was the only sensible approach,” Emmert said. “So before we sent any notice out, it was clear that the board was 100 percent supportive of the decision and everybody did it with, as you can imagine, deep regret. I told the board when we finished, I’ve never been so disappointed at having a unanimous vote before.”

The post AP Exclusive: Inside NCAA’s Attempt To Save March Madness appeared first on The Village Reporter.

Published in Sports and Top