Cowboys For President Trump Defends ‘Go Back To Africa’ Comments 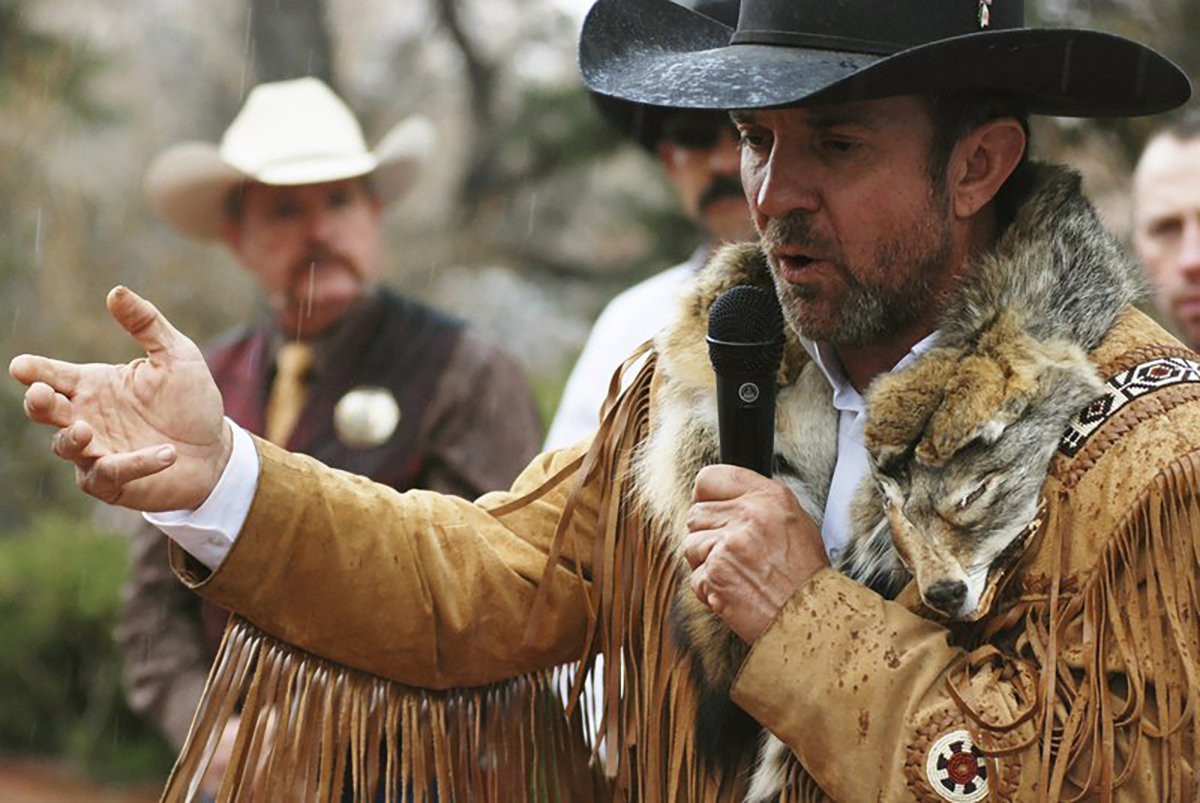 FILE – In this March 12, 2019, file photo, Otero County Commissioner and Cowboys for Trump founder Coy Griffin denounces gun control and pro-abortion rights bills in the New Mexico State Legislature at a protest outside the Statehouse in Santa Fe, N.M. The group said this week seek arbitration in a fight with the New Mexico Secretary of State over fines and required reports. (AP Photo/Morgan Lee, File)

By Morgan Lee and Russell Contreras

SANTA FE, N.M. (AP) — The founder of the Cowboys for Trump political support group urged people who support performances of the Black National Anthem at football games to “go back to Africa” and condemned as “vile scum” people who portray the Confederate flag as racist, in a live Facebook video that has since been removed.

The selfie video of Otero County Commissioner Couy Griffin was recorded Sunday on Facebook and watched by at least 2,200 people before it was removed from the Cowboys for Trump website. Griffin says he did not remove the video.

The 35-minute speech from Griffin on themes of God, faith, politics and country takes place on a mountaintop in southern New Mexico, where Griffin says he fasted for three days as he contemplates the nation’s political fate as the November election approaches.

In one passage, he sharply criticizes those who support performances at football games of the “Lift Ev’ry Voice and Sing” — traditionally known as the Black National Anthem — as a gesture of solidarity against racial injustice.

“They want to destroy our country. They want to talk about playing a Black national anthem before football games? I got a better idea, why don’t you go back to Africa and form your little football teams over in Africa and you can play on a(n) old beat-out dirt lot and you can play your Black national anthem there. How about that?” he said. “This is America, we play the National Anthem in America today.”

Reached by phone Monday, Griffin said he was speaking out against a double standard that he says only holds white people responsible for racist behavior, and described the “back to Africa” phrase on his part as a poor choice of words.

“It seems like we have such a double standard,” Griffin said. “You know the Black community can say whatever they feel like saying about the white community and label us all as racist. But as soon as you disagree with something like the Black National Anthem being played, then all of the sudden you’re deemed a racist.”

In his speech, Griffin wears a shift with a “C4T,” which stands for Cowboys for Trump, and acknowledges that media outlets are likely to highlight excerpts of his speech as racist. He used an epithet to describe Chinese Americans and “Africans” to describe Black activists and urged any person of color who didn’t identify as “American” first “to go back.”

Harold Bailey, president of the Albuquerque chapter of the National Association for the Advancement of Colored People, said he was horrified by Griffin’s comments. He called the remarks some of the most hateful things he’s heard in recent memory.

“This cat is off the charts. There is no denying that this is a racist rant meant to spark violence,” Bailey said. “It’s despicable and unacceptable. I really don’t know what else to say.”

Devont’e Kurt Watson, a member of the Black Lives Matter movement in Albuquerque, also called Griffin’s remarks bigoted and believed they were given to incite violence.

“The Black National Anthem is an American anthem and we are fighting for American ideals,” Watson said. “He’d know that if he’d have a conversation with Black Lives Matter instead of acting like a child.”

Griffin said he would never incite violence — unless perhaps the U.S. Constitution were under attack. And he explained that he supports a vision for an America of all races and ethnicities without bias against whites.

“It’s such a hypocritical thing for people to say, ‘Well, you know, you’re only an immigrant if you’re a person of color,’” he said. “If you don’t have Native American ancestry, we’re all immigrants. … And we need to get back to that.”

Trump plans to visit the Permian Basin oil region in West Texas on Wednesday, including an appearance at an oil rig in the Midland area. Griffin said he was invited and hopes to attend. He said he considers Trump a friend but that his own online speech was not coordinated with Trump or his visit to the neighboring state of Texas.

“We stand on our own set of ideals,” Griffin said. “And they just so coincide with the Trump administration.”

Griffin’s speech delves into his opposition to New Mexico’s health orders in response to the coronavirus pandemic, and his decision to forgo visits from his son under a joint custody agreement rather than wear a mask due to the virus.

In March, Griffin faced calls to resign from his county commissioner’s seat after he said in a video, “the only good Democrat is a dead Democrat.”

The post Cowboys For President Trump Defends ‘Go Back To Africa’ Comments appeared first on The Village Reporter.