Evergreen Ends Season With A 42-6 Win Over Montpelier 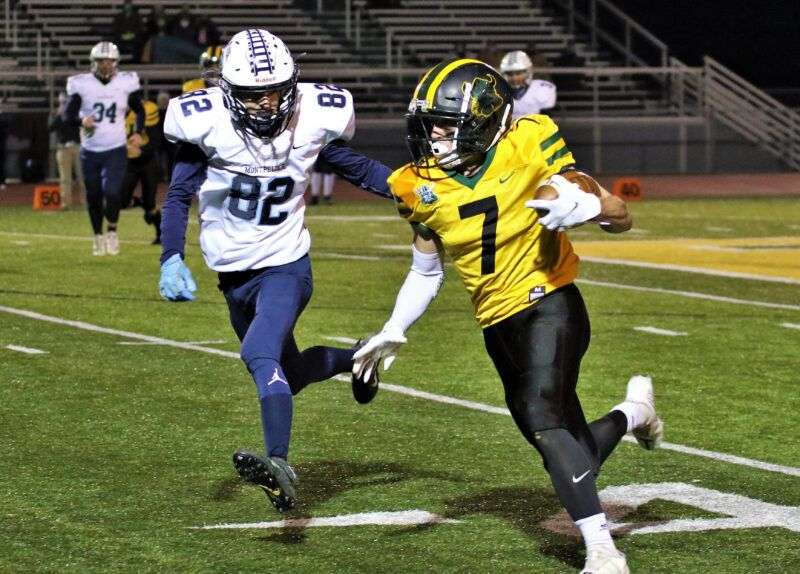 ELUDING THE DEFENSE … Tanner Pollard carries the ball with a Montpelier defender in pursuit. VIEW ALL PHOTOS OF THIS CONTEST ONLINE FOR FREE AT WWW.THEVILLAGEREPORTER.COM. (PHOTOS BY BILL O’CONNELL, STAFF)

METAMORA-Evergreen’s Jacob Riggs had a big night receiving to lead the Vikings to a 42-6 win over Montpelier as Evergreen ends the season with a two-game winning streak.

Riggs wasted no time by hauling in a 41-yard touchdown pass from Payton Boucher to put the Vikings on top 7-0. Bouched added another TD pass later in the quarter by going three yards to Conner Hewson to make it 14-0. Evergreen pushed the lead to 21-0 at halftime after a 30-yard TD run by Brock Hudik.

Montpelier’s Colin Crisenberry started the second half scoring with a 79-yard TD run to cut the Evergreen lead to 21-6.

Evergreen came right back as Boucher would scamper 16-yards for a score to make the score 28-7. The Vikings added two more scores in the fourth quarter as Boucher found Riggs on a 32-yard scoring strike and Hudik had a 16-yard touchdown run.

The Vikings totaled 258 yards on the ground led by Hudik with 162 yards and Boucher added 104 yards to go along with his 10/16 passing for 216 yards and two touchdowns. Riggs finished with eight receptions for 197 yards and two TDs. Crisenberry topped the Locos on offense with 111 yards on ten carries and the lone Montpelier touchdown.

Evergreen concludes the season with a record of 2-8 while Montpelier finishes 1-7.