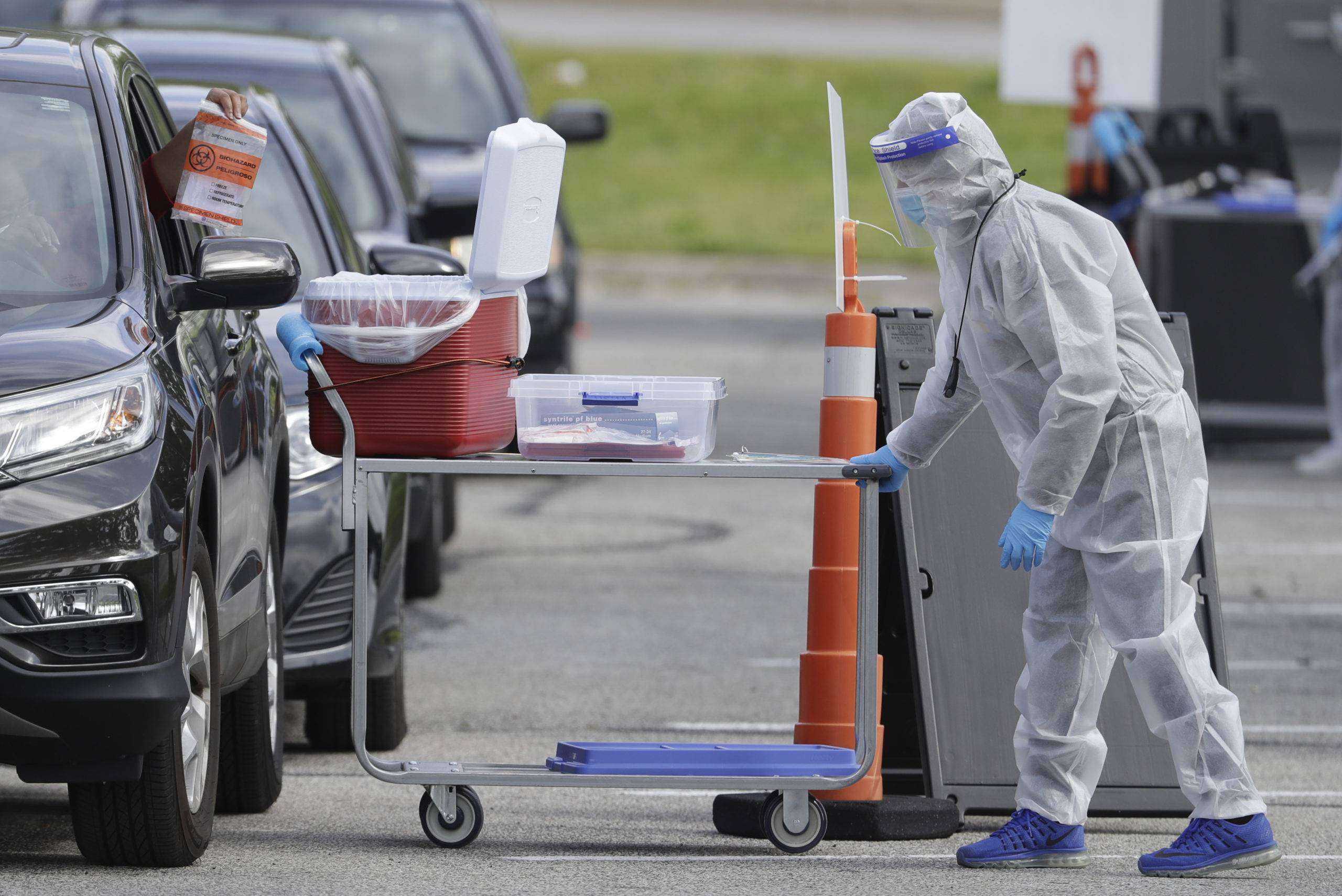 A medical worker pushes a cart for a customer to place a COVID-19 sample into a container at a drive-thru COVID-19 testing site, Friday, May 22, 2020, in Indianapolis. The state’s business and gathering restrictions are being eased for most of the state beginning Friday. (AP Photo/Darron Cummings)

Officials pointed to some hopeful signs of economic recovery as restrictions on business and gatherings have eased, even as the state grows closer to recording 2,000 COVID-19 deaths since the outbreak hit in March.

About 546,000 people in Indiana were unemployed in April, more than five times as many as a month earlier, and the state had the fifth-highest unemployment rate in the nation, according to federal statistics released Friday.

A U.S. Bureau of Labor Statistics survey conducted in March — just before the pandemic forced the closure of most businesses — placed Indiana’s jobless rate at 3.0%.

Indiana’s private sector employment fell by 380,500 workers from March, the state Department of Workforce Development said. The hardest-hit sectors were leisure and hospitality, with 116,000 job losses, and manufacturing, which lost about 78,000 jobs.

“Those employers have informed us that they are ramping back up at full strength,” Payne said.

“We do see some signs, but it is going to take some time to get out of this,” Payne said.

Indiana’s state government agencies have been told to cut spending by 15% for the coming year, after state tax collections were about $960 million, or 44%, lower than expected for April.

Gov. Eric Holcomb said the state could see a drop of more than $3 billion in tax revenue over the next 14 months of its current two-year $34 billion budget — more than the $2.3 billion in cash reserves the state has built up over several years.

Holcomb said the spending cut order would likely just be a first step, although he said he wouldn’t do anything “counterproductive” to the state’s COVID-19 response.

No cuts to school or university funding have been announced, although education funding makes up about 57% of state spending and was cut significantly during the last recession in 2009-10.

Budget officials last month imposed a widespread hiring freeze for agencies that Holcomb oversees, such as the Bureau of Motor Vehicles, Department of Transportation, Department of Natural Resources and the state prison system.

“It’s going to be a combination of spending cuts, including using our reserves and also using the federal assistance to get to the other side of this,” said Office of Management and Budget Director Cristopher Johnston, Holcomb’s top fiscal adviser.

Indiana heath officials on Friday added the deaths of 28 more people with confirmed or presumed coronavirus infections to the state’s toll from the pandemic.

Those additional deaths, most of which occurred Wednesday or Thursday, give the state an overall total of 1,941 confirmed or presumed COVID-19 fatalities since Indiana’s first was recorded March 15, according to the Indiana State Department of Health.