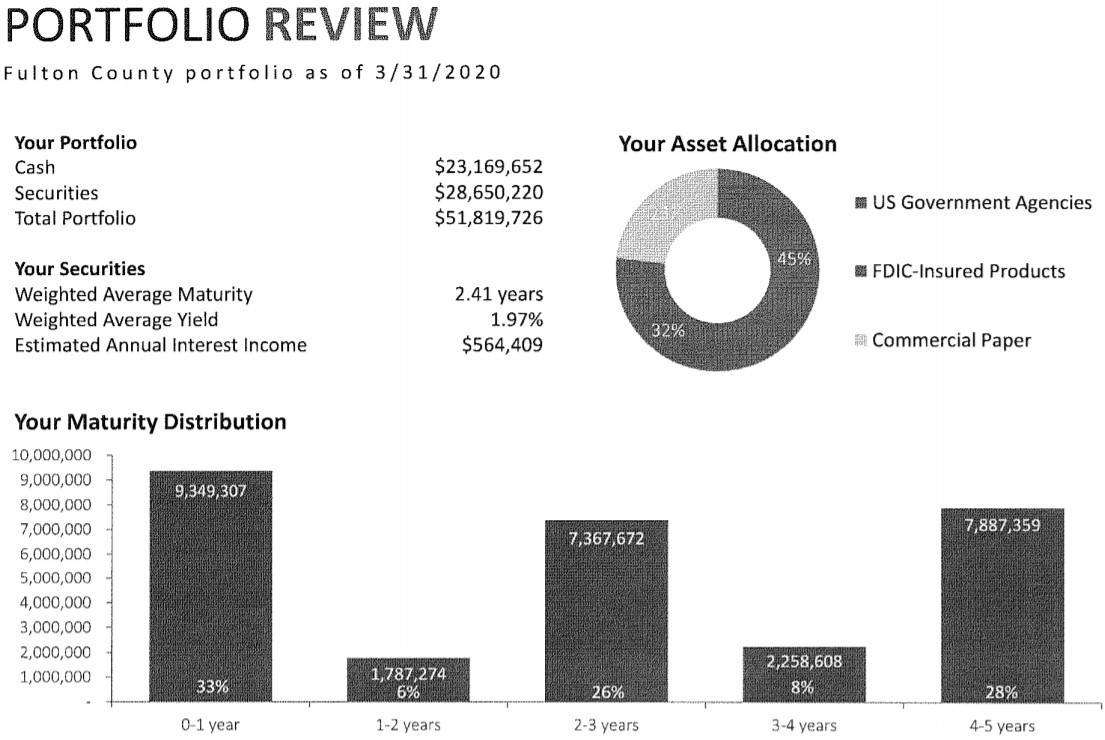 Fulton County Investment Portfolio as of 3/31/2020

With the major turmoil in the investment market caused by the COVID 19 Pandemic, Scott Gruber of Meeder Investment Management and Charlene Lee, Fulton County Treasurer gave an investment advisory update for the financial assets owned by the County during the April 23 Fulton County Commissioners meeting.

Bonds are being called in and reissued at much lower rates.  Its been a hectic time trying to keep up with that.”  She then turned the meeting over to Mr. Gruber to explain the logic behind the shifting investment strategy during this chaotic time.

Mr. Gruber explained that while nobody in the investment community saw the pandemic coming, there were signs in 2019 of declining interest rates and that the economy was potentially starting to slow. He also said that the country, for the first time in its history, had just finished a full decade without experiencing a recession and most investors were expecting some type of a reset or correction in the market.

“All of those things we were preparing for to a certain extent and getting funds pushed out longer,” said Mr. Gruber.

“That is going to benefit the County for years to come because we were able to get some higher interest rates locked into the portfolio out three, four and five years prior to the falling interest rates. And when I say falling, that’s almost a light term. They’ve almost fallen off a cliff, so to speak.”

Mr. Gruber compared the current financial crisis to what the country went through in the Great Recession of 2008 and said important lessons were learned.  “This is a very different situation. In 2008 it was a self-inflicted situation. Banks were being too lax on their lending standards. People were getting loans that they shouldn’t have, defaulting and losing homes.”

“It was a systemic issue across the economy. This happened over several months, six months even before you saw the full effect of the recession,” he recounted. “The pandemic that we’re in right now is obviously much different. It happened overnight. What the Fed has done is they have stepped in; they have been very proactive along with the government in rolling out these stimulus plans.”

“They’ve rolled out about six trillion dollars in stimulus funds (to help stabilize the economy).  Having the Feds drop interest rates on the front end has been a good thing.”

Overall, about 50% of Fulton County investments were pushed out to long terms of up to five years. “For liquidity and caution we’ve always wanted to maintain a decent chunk of money coming due inside of 12 months. Having liquidity on the front end of the portfolio has always been important to us,” said Mr. Gruber.

“Right now, we have about 33% coming due inside of 12 months, about nine million dollars.  We’re comfortable with what we have out longer and we want to be ready so that when interest rates go up, we have money coming due and we can then take advantage of those higher interest rates. But at the same time making sure you have funds coming in regularly in addition to your cash on hand.”

Bill can be reached at the publisher@thevillagereporter.com