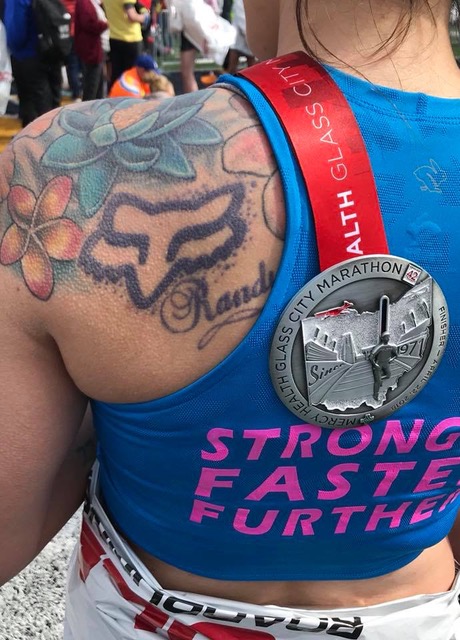 Kaitlyn Ann Henricks-Yoder, started running when she was 7 years old. She became a fierce competitor while running for Edgerton Track and Cross Country. If graduation was a race, she made good time by finishing early, so she could attend Purdue University.

She has been running half marathons and 5ks until 2011. That’s when tragedy struck and her life changed. Kaitlyn’s brother Ryan was shot in a firearms accident. “When that happened, I decided I had to push harder and run full marathons. In honor of my brother.” “I’ve finished 14 marathons since that moment.”

“Running was something I needed to turn to, to help me get through everything with the loss.” She likes to run in Bryan and has a favorite 4 mile course in the country. “I ran past family houses for safety, but I can also be alone and with myself”

Kaitlyn has the goal to run every major marathon and earn a Six Star Finisher Medal. She has completed New York, Boston, Chicago and is now on her way to Berlin, September 29th with her mother and friend for support, to only need London and Tokyo. “I plan to finish within the next 2 years and have already been accepted to London.” The medal is presented by the World Marathon Majors and is one of the most exclusive race prizes in the running world.

Qualifying time is needed to enter into the major marathons, Kaitlyn likes to run the Glass City Marathon in Toledo. “It’s a really nice course to run, I like it a lot. I can finish it in about 3 and a half hours”. If you’ve ran in any of the local 5k’s, you’ve probably noticed someone winning the girls division very regularly, that would be Kaitlyn. She won her last 5k in girls runners and finished 6th overall. “I go through about 8 to 10 pairs of shoes a year, my favorite are long distance.”

Ric can be reached at  publisher@thevillagereporter.com