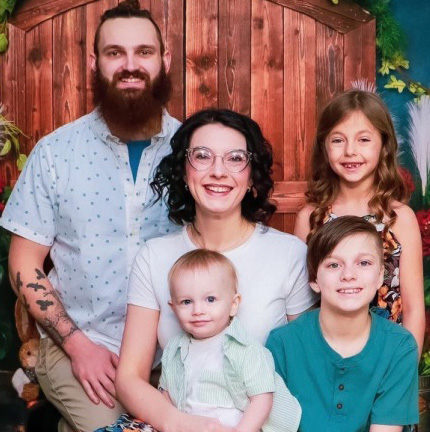 Both of our families are saddened to lose these five souls, but know they are together during the greatest journey there is in heaven.

If you knew this family, you would know they were exceptional from day one.

To Xavier and Muriel, family was the most important part of their lives – more important than anything else.

Xavier accepted children who were not biologically his – but with Muriel, together they created an incredible family.

Baby Riggs William Brown was a joyful addition when he was born on Aug 17, 2020 to his parents, Xavier and Muriel.

Their family situation was interesting and loving. Xavier and Muriel’s outlook on life brought lives together and focused on what they believed was most important, creating a great future with their family and friends.

Muriel and Xavier had an open home, one filled with energy and life. They made all feel welcome to their home.  They were a positive influence on many.

Those that knew them were better because of them. This was a special family.  They worked to ensure people felt connected and valued.

They extended themselves to not only their friends and family, but also to their greater community. They made everyone feel included, accepted, and loved.

Muriel Hannah Michael is survived by her loving mother, Monica Michael and loving father, Michael K. Michael; her best friend and sister, Mariah Michael (Tyler) and Mariah’s two children, Willow age 2 and River age 3 months; she also leaves behind 19 aunts and uncles; 33 cousins and numerous 2nd cousins from the Marinelli side of her family; also surviving are her Aunt Pat Agsten, Uncle George (Samone) Michael and many cousins on the Michael side of her family. Xavier is survived by his parents Peter and Monica (Wolfe) Brown; sister, Kirsten Brown; many aunts, uncles and cousins. Xavier, Muriel, Deklan, Aurora and Riggs leave behind many, many friends – so many they cannot be counted.

Muriel will be remembered always as a loving mother, willing to do anything for her children – to the moon and back if she could! When Xavier came into her life, they became a complete family – Xavier was a great man and doting father, loving Deklan and Aurora as his own.

Inseparable even in death, a Memorial Service for Xavier, Muriel, Deklan, Aurora and Riggs will be held for family and friends on Saturday, April 2, 2022 at 11:00 a.m. with visitation from 10 – 11:00 a.m. at Crossroads Evangelical Church, 845 E. Leggett St., Wauseon, Ohio with Pastor Matt Boyers officiating.

Edgar-Grisier Funeral Home in Wauseon has been entrusted with arrangements.

Special messages of condolence for the Michael and Brown Families may be given at www.grisierfh.com

To send flowers to the family or plant a tree in memory of Muriel Michael, please visit our floral store.