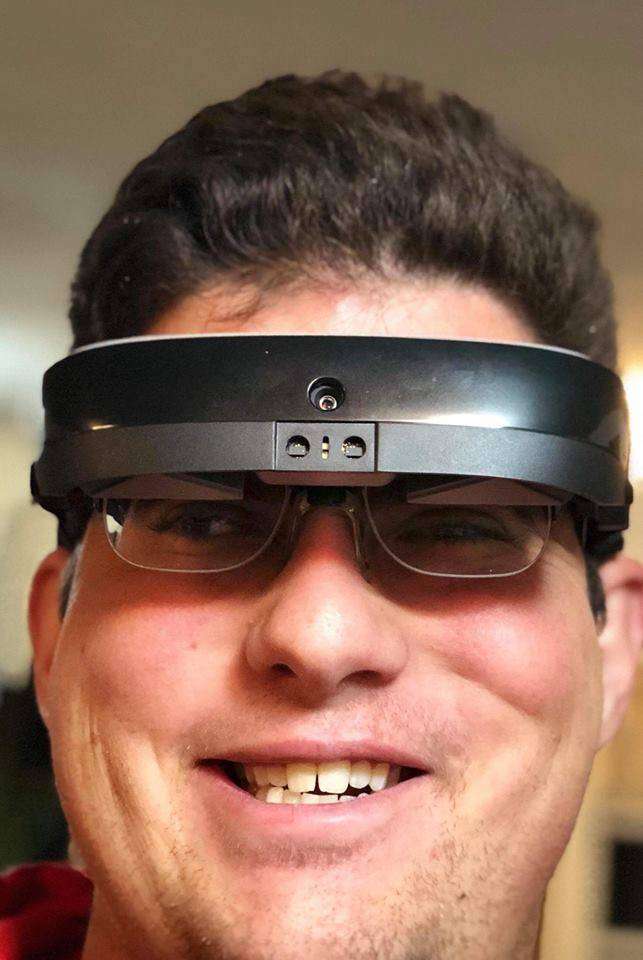 Two years back, Ben Murray of Bryan got his eSight optics, and his life was never the same. Legally blind, Ben tried on a demonstrator model of the new ‘smartglasses’ technology, and a whole new world opened to him. The high definition camera in the eSight visor transmitted images to a portable supercomputer, where they were then amplified, processed through proprietary digital algorithms, and fed into the dual organic LED displays of the visor in front of his eyes. The fifth sense that Ben had missed since birth was lacking no more, and the experience moved him to tears.

He had to have this new hardware, but there was a $15,000 hitch…the cost of the visor. It took better than a year of fundraising, but the money was finally raised. Ben and his eSight visor have been inseparable ever since as he campaigns for those who could benefit from the technology.

Recently, that campaign has taken a positive turn, as Ben has been upgraded to the new Third Generation model visor. The incredible features of the original eSight hardware that brought sight to many have now been enhanced even further. Bear in mind, we’re not talking Geordi La Forge technology here, but it is still a device that deliver feature-packed sight to the legally blind.

While the new visors are smaller, more compact, and weigh less than their predecessors, they have more capabilities. The third generation models allow for a 24X zoom of images, while the improved patented Biopic Tilt feature not only helps avoid motion sickness, but it greatly enhances peripheral vision. “I have full side vision with the new tilt ability,” Ben said.

The new visor carries Bluetooth and Wi-Fi capabilities onboard. The Wi-Fi, according to Ben, “…allows me to install software updates, and stream what I see to a tablet or smartphone so others can see how I see.” When making adjustments of the features of the visor, it will provide a voice confirmation to the user. All of these features, and a lot more…while still saving power with extended battery life.

Although eSight users still cannot legally drive a motor vehicle, it still provides them with mobile vision capabilities that rival those of fully sighted individuals. What may be the biggest and best advance is one to which Ben can readily relate. He worked for over a year to secure the $15,000 needed to get his first visor. Today, the manufacturers of the eSight technology offer their own financing, and on top of that, the price has dropped by 33 percent over what Ben originally paid for his hardware.

While the advantages of sight are not lost on Ben, he is not content to simply stand pat. He has been an advocate for the company, as well as for those who are missing out on what he has experienced…sight. “The best thing that comes out of all this,” he said, “…is the joy of helping others.”